The Neuse River Valley Model Railroad Club’s HO layout covers an area of 8 feet by 40 feet built on modular tables.  Club members have created scenery with industry, agriculture, small towns and cities.  There are three mainlines and one industrial loop with numerous sidings and spurs for delivering cars to various industries, the Railway Express Agency and a passenger station. Some club members run European trains so we also have a German scene.  Scenery is an ongoing project, but like in real life, the trains have the right of way.  The track is powered by a Digitrax DCC System.  Members can bring their locomotives and cars or use our club equipment.  Guests are welcome. 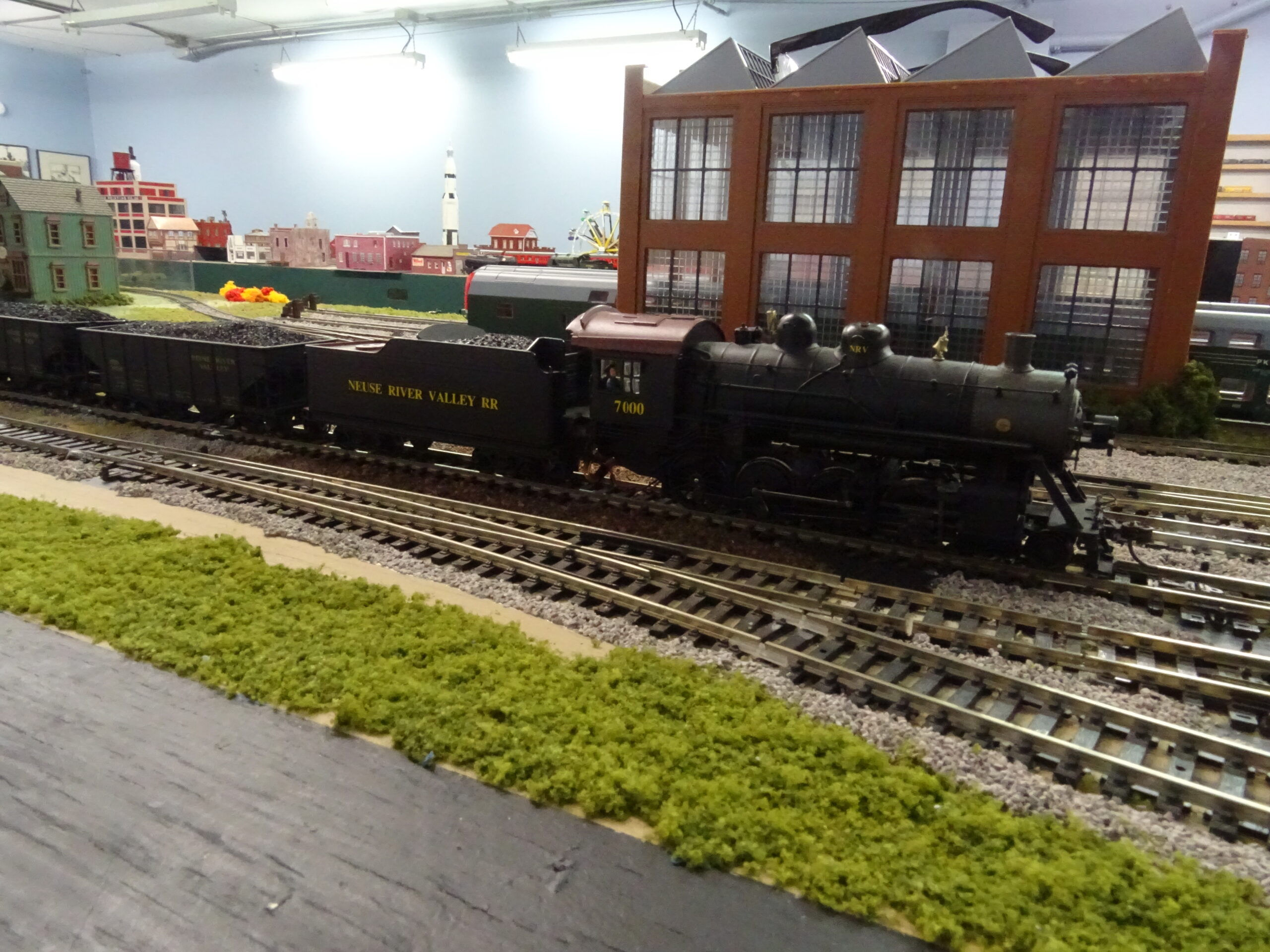 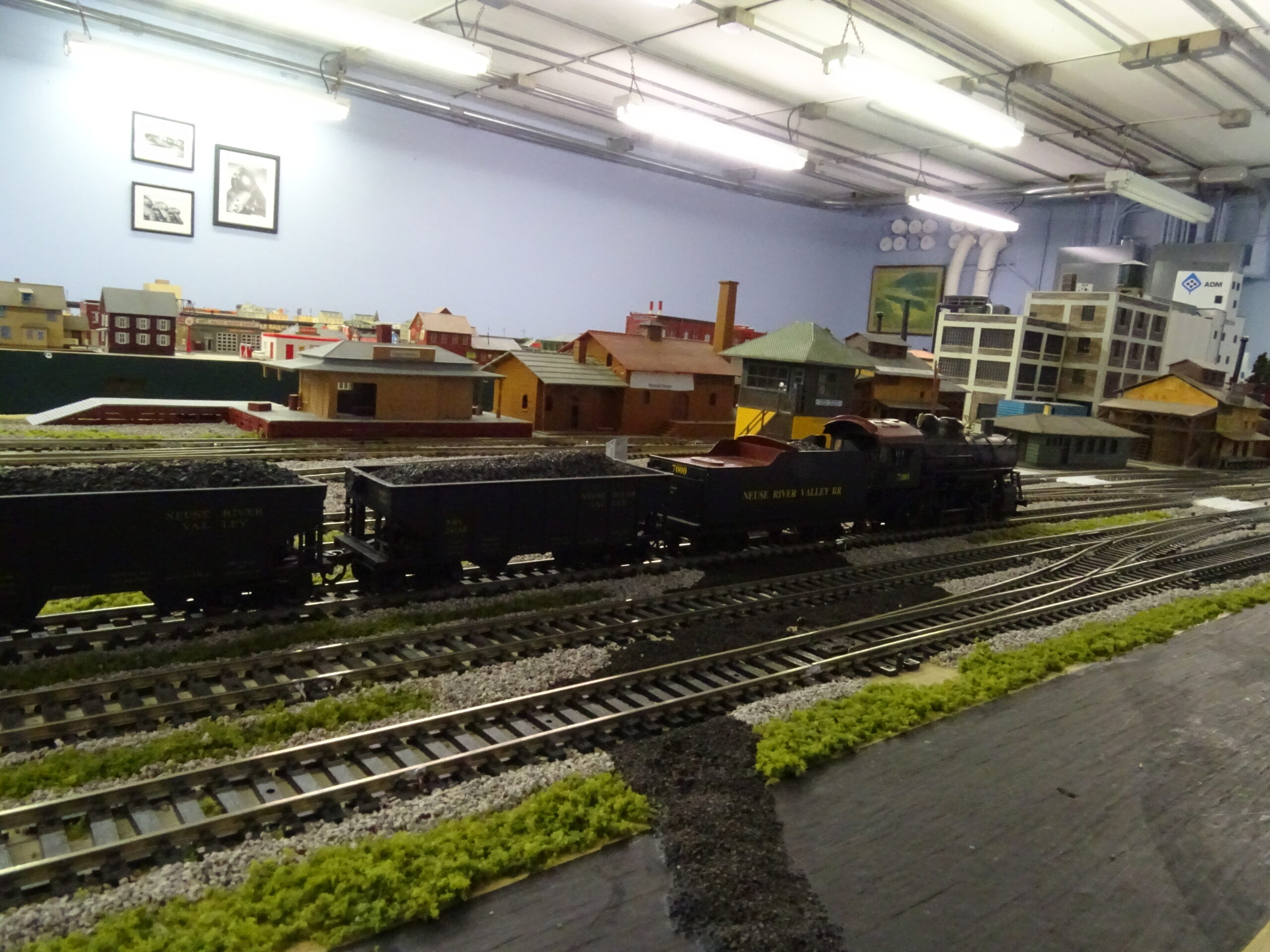 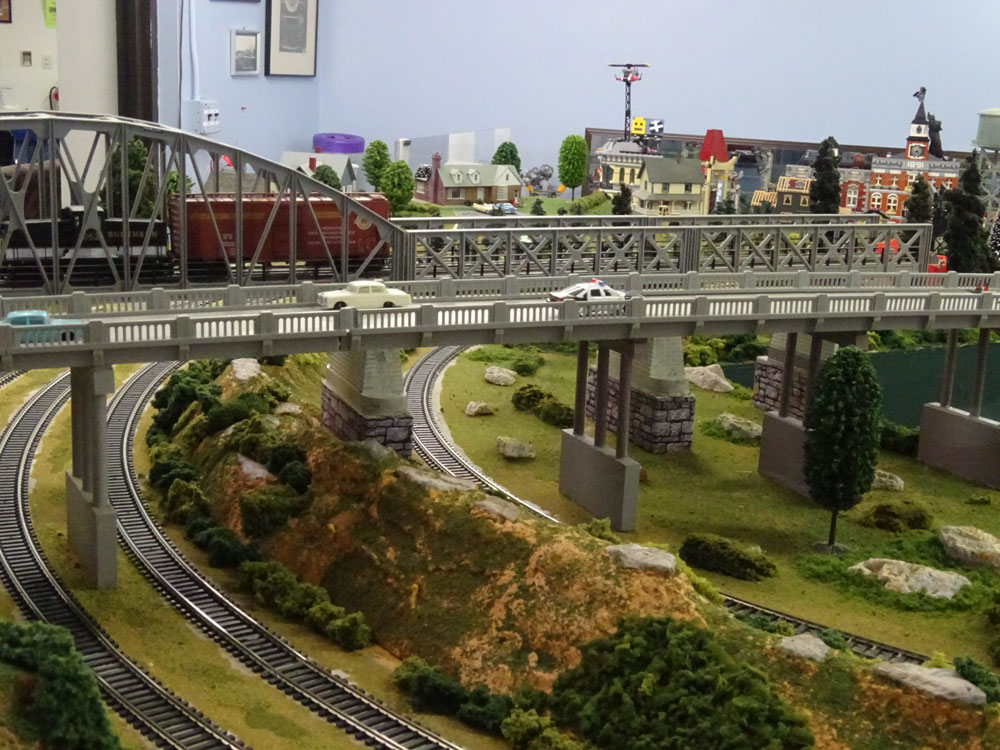 Our N scale layout is 24 feet by 3 feet.  The layout features a double track main line that stretches about 19 feet.  A ground level traction streetcar loop operates within the main line.  An additional electrified elevated loop operates over the industrial and urban sections of the layout.  It also serves various passenger stations.  The urban / industrial sections offer extensive switching opportunities, passing sidings, small yards and engine facilities, including an operating turntable serving a round house. 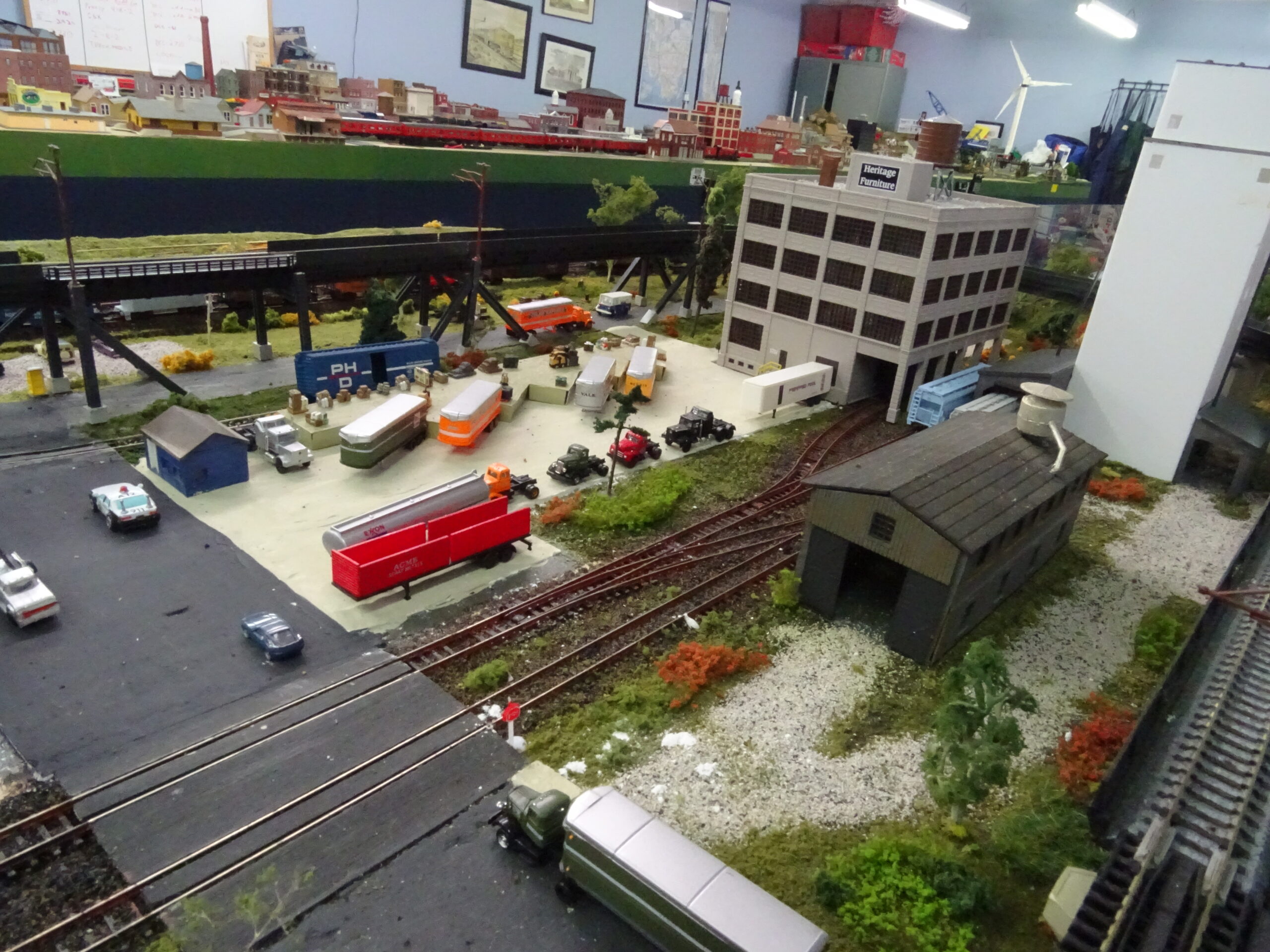 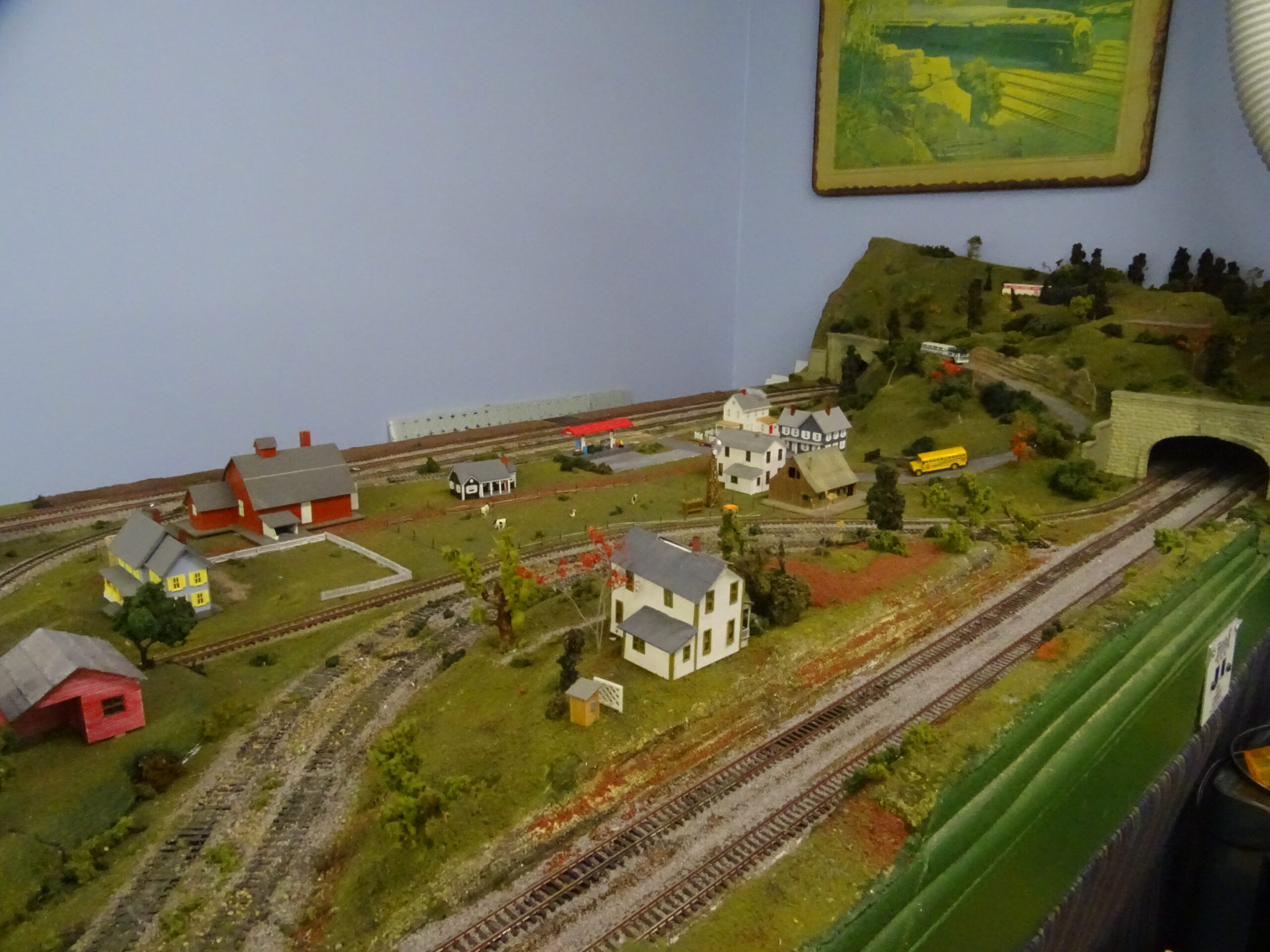 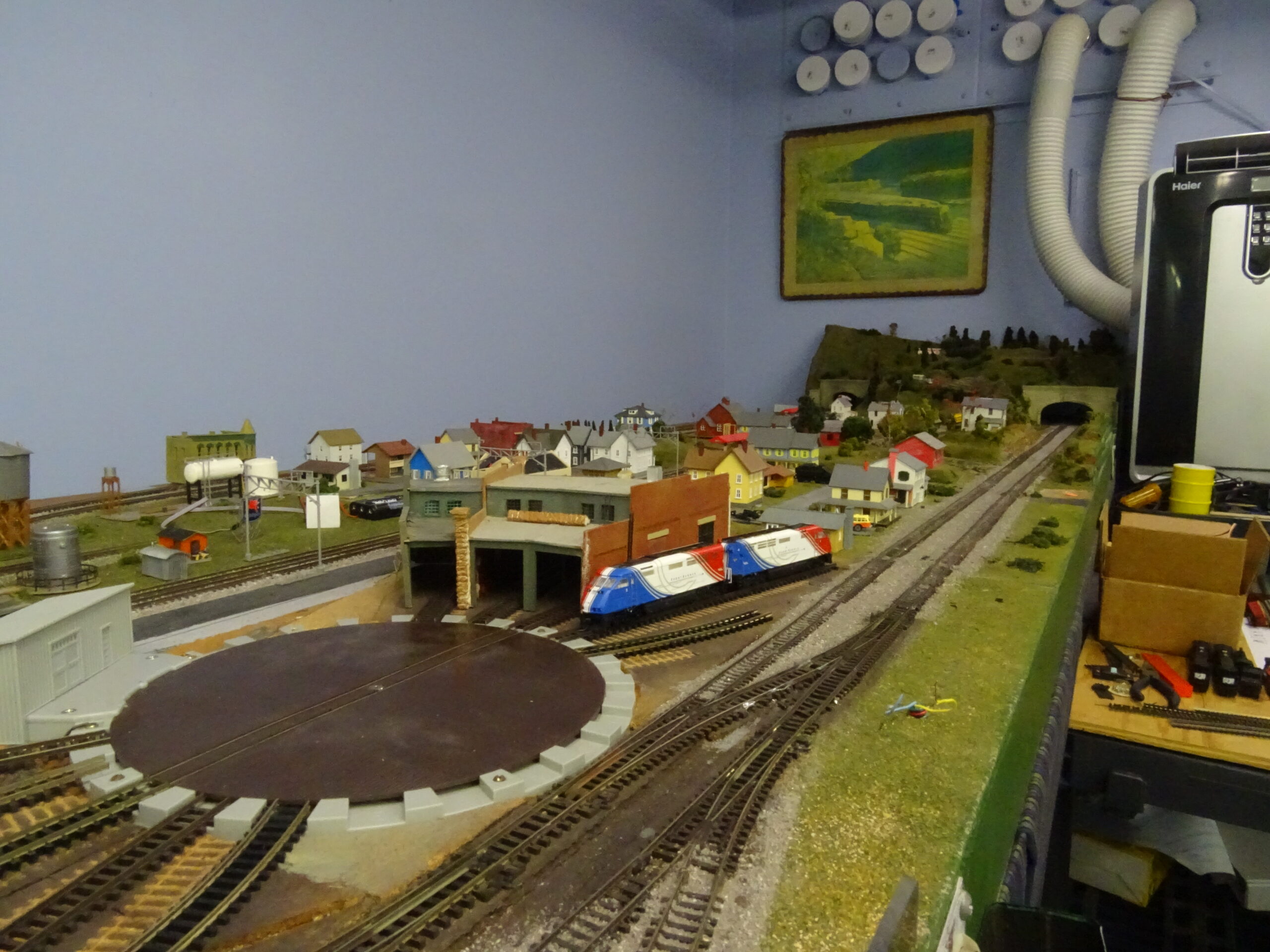 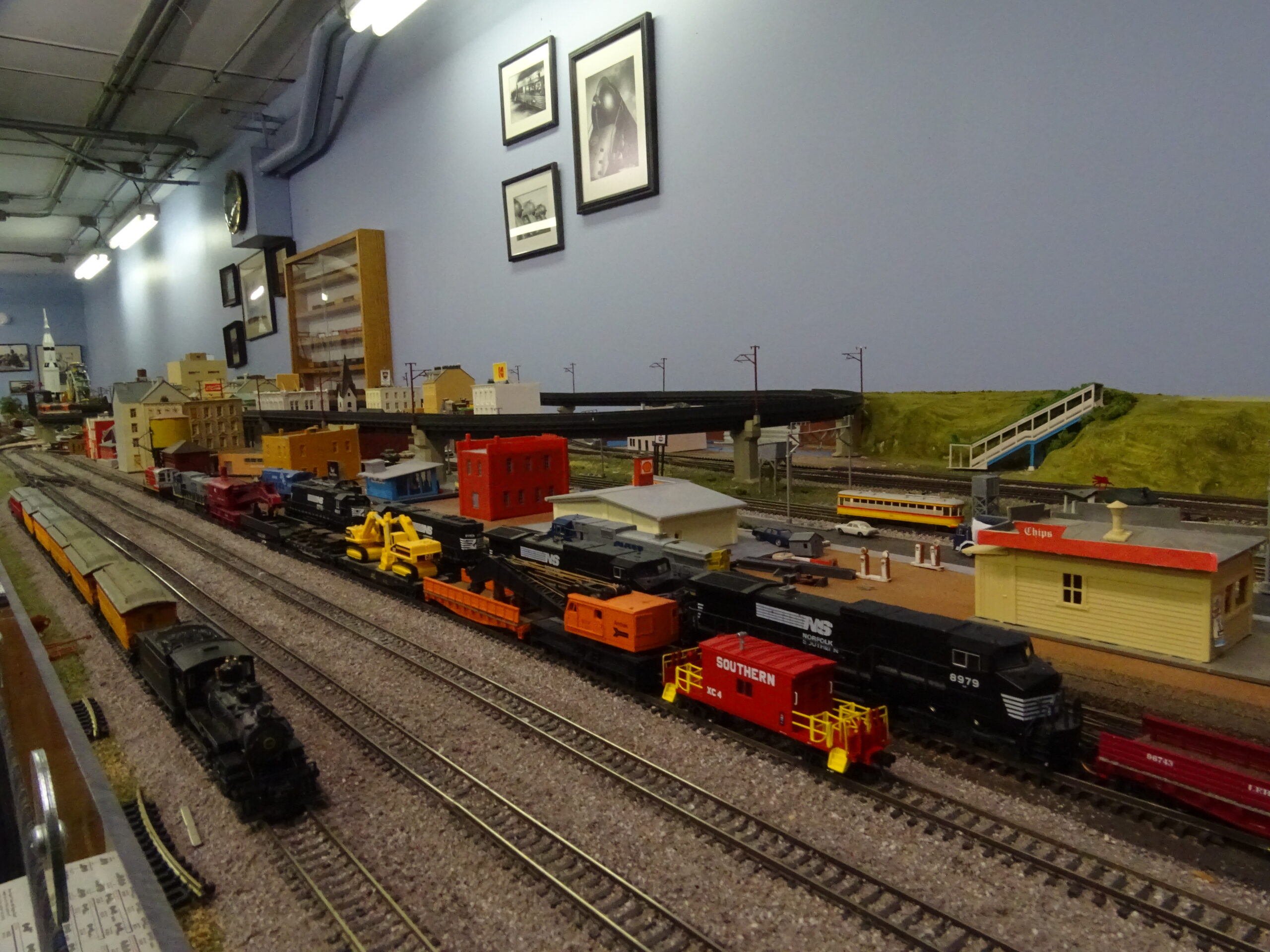 The Club’s O scale layout is approximately 18 feet by 7 feet with 4 separate loops which can be operated independently or together with several interconnecting switches.  There are also two sidings and a transition line between the raised level and the lower level.  A reversing loop is also available so that trains can be turned around without removing them from the tracks.  Landscaping is constantly in progress as ideas and time are available.  Lionel O27, O scale, LionChief and MTH engines can operate on the layout.  Our club has a variety of engines and rolling stock which run on the layout and members frequently run their own personal equipment.  We also welcome visitors to bring in their equipment to run on our tracks.

The club also has a traveling sectional three loop layout approximately 19 feet by 9 feet which has been set up at our spring and fall shows at the State Fair Grounds and at other venues when asked. 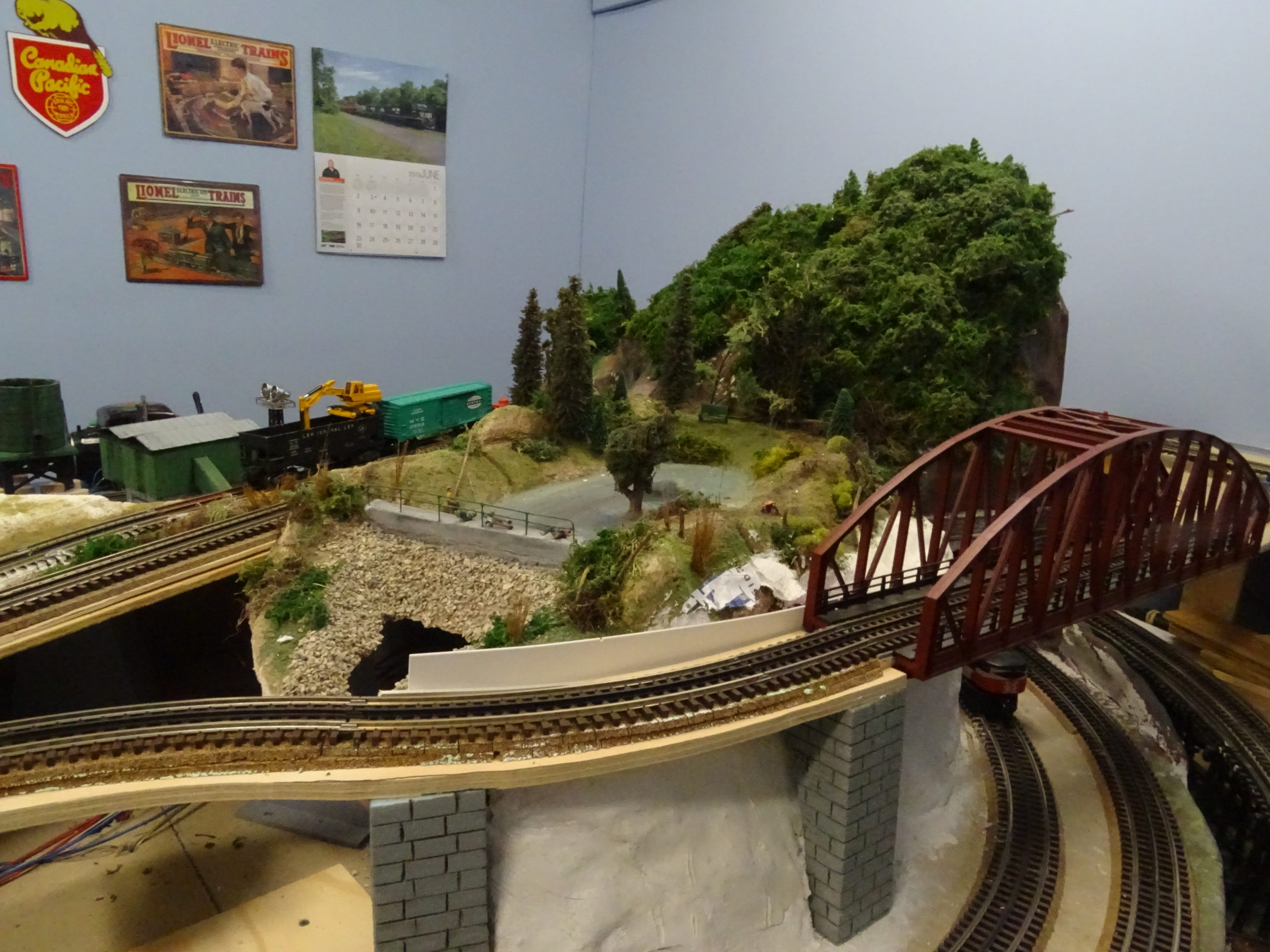 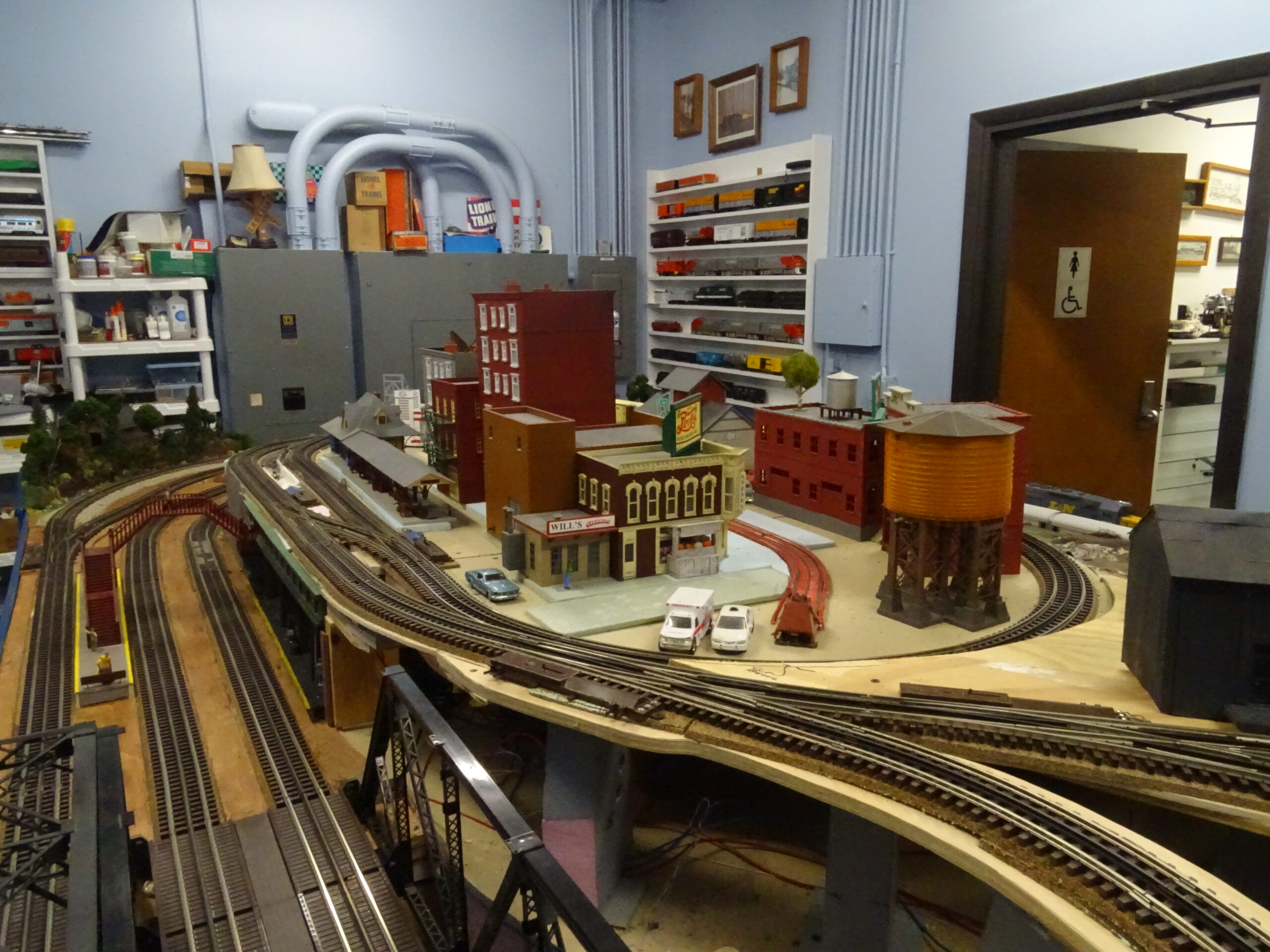 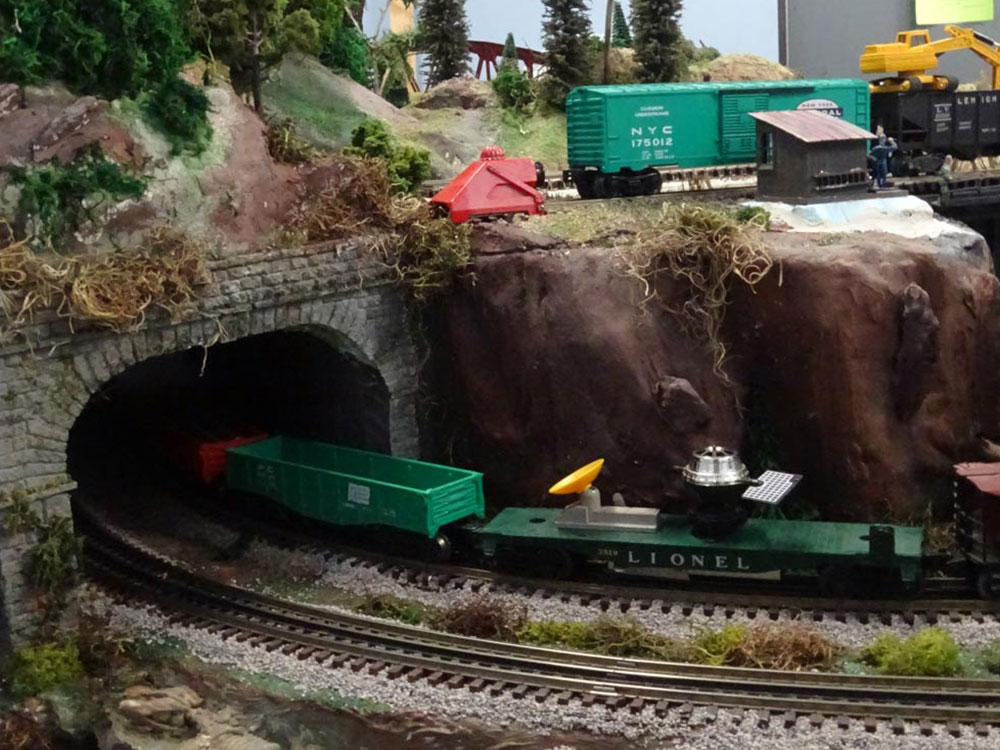 Our S scale layout is a vintage American Flyer, 3 track 5’ X 9’ display. Two-rail American Flyer track with A.C. Gilbert rubber track bed adds realism and quieter operation. All houses are mid-century Plasticville O/S scale.
S scale is in the opinion of some the most logical scale. It is smaller than O scale, therefore taking less space, and larger than HO, making it easier to work with (especially for senior modelers). S scale is 3/16 of an inch to 1 foot.
The name usually associated with S scale is American Flyer, a brand owned by the A.C. Gilbert Company (1909-1967), which also made Erector Sets, chemistry sets and microscopes. The headquarters in New Haven, Conn., was called “The Hall of Science”. 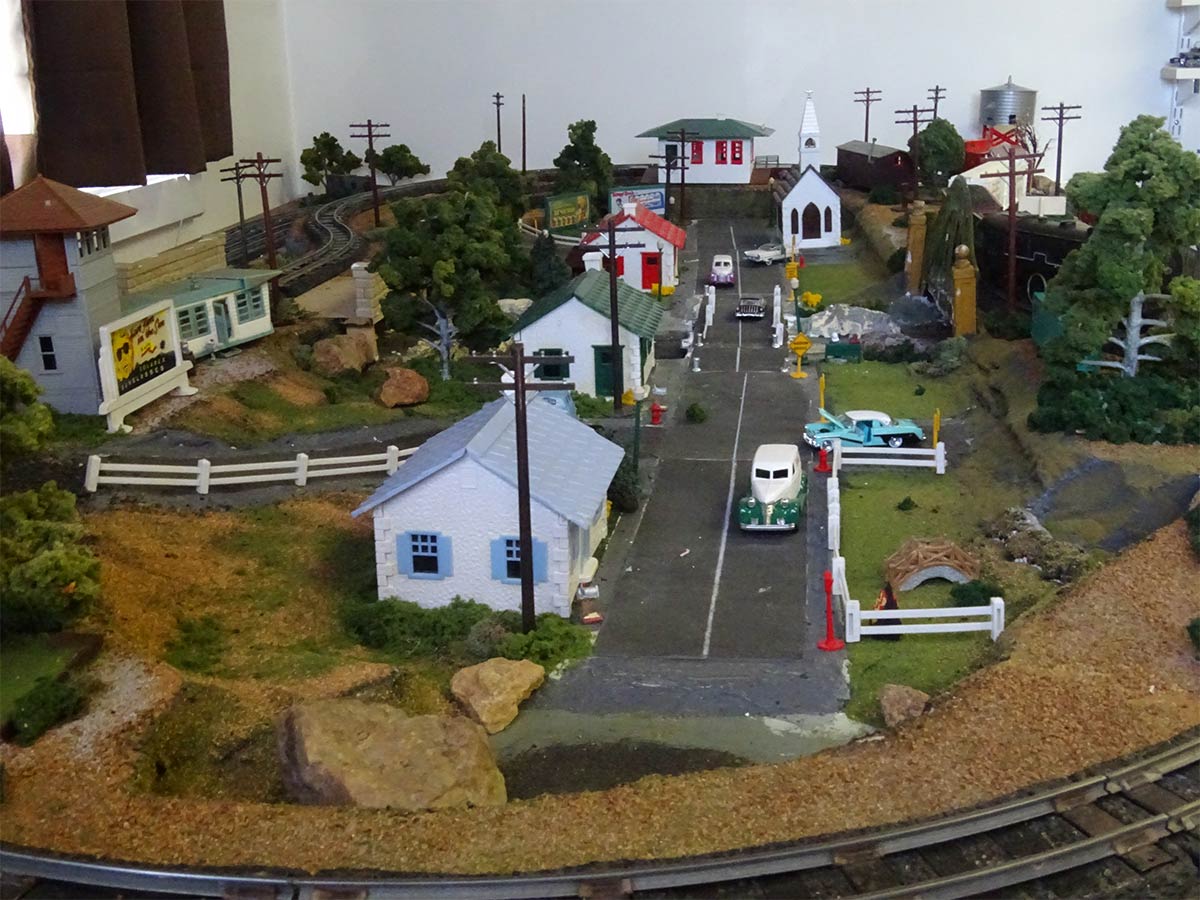 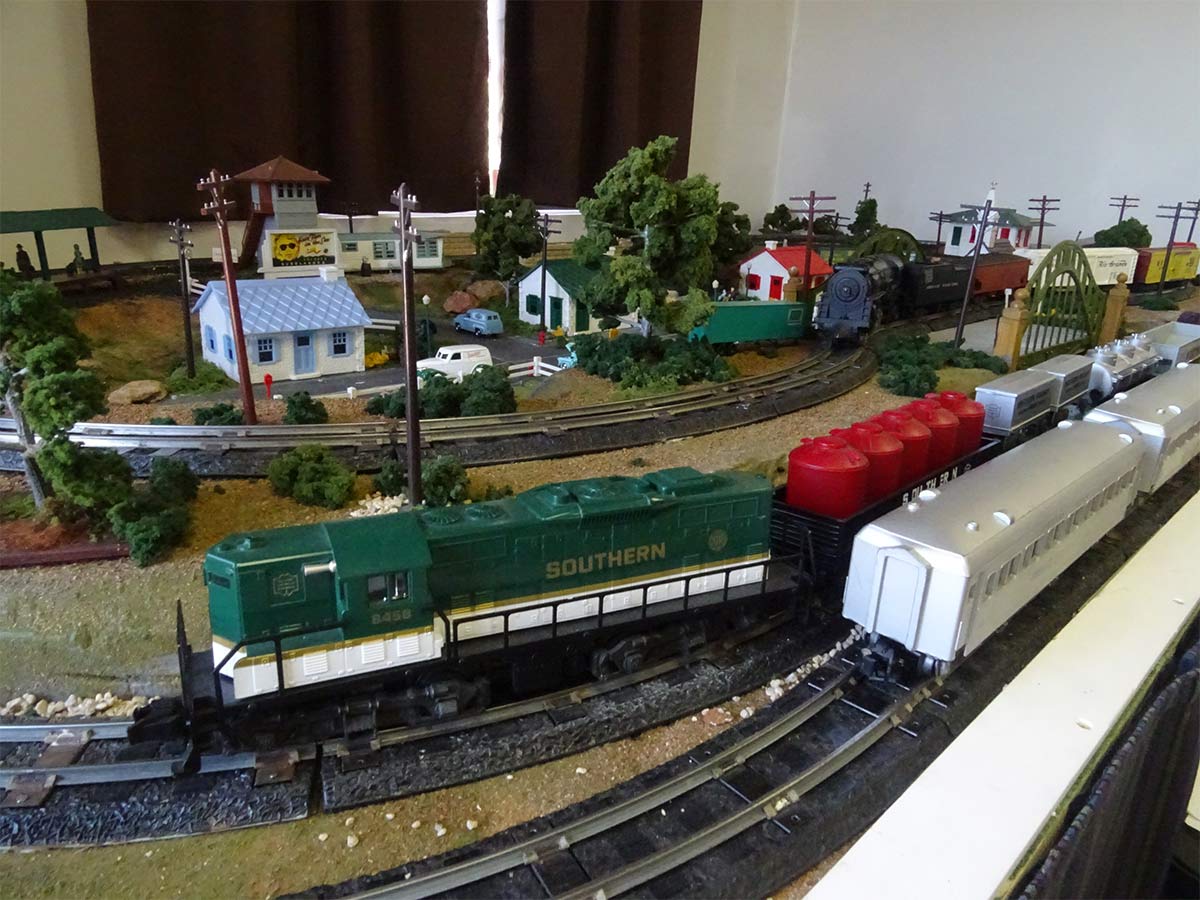 Our Garden scale layout encircles the Club’s lobby/sitting/meeting room. The layout is suspended from the room’s drop ceiling. There are two complete loops joined by a single storage track. Members bring in their own trains to run, from modern diesels to nineteenth century steamers. On any day you may see a Union Pacific diesel or a B & O 4-6-0. Children enjoy seeing both Thomas with his consorts Annie and Claribel, as well as Percy and the Troublesome Trucks. 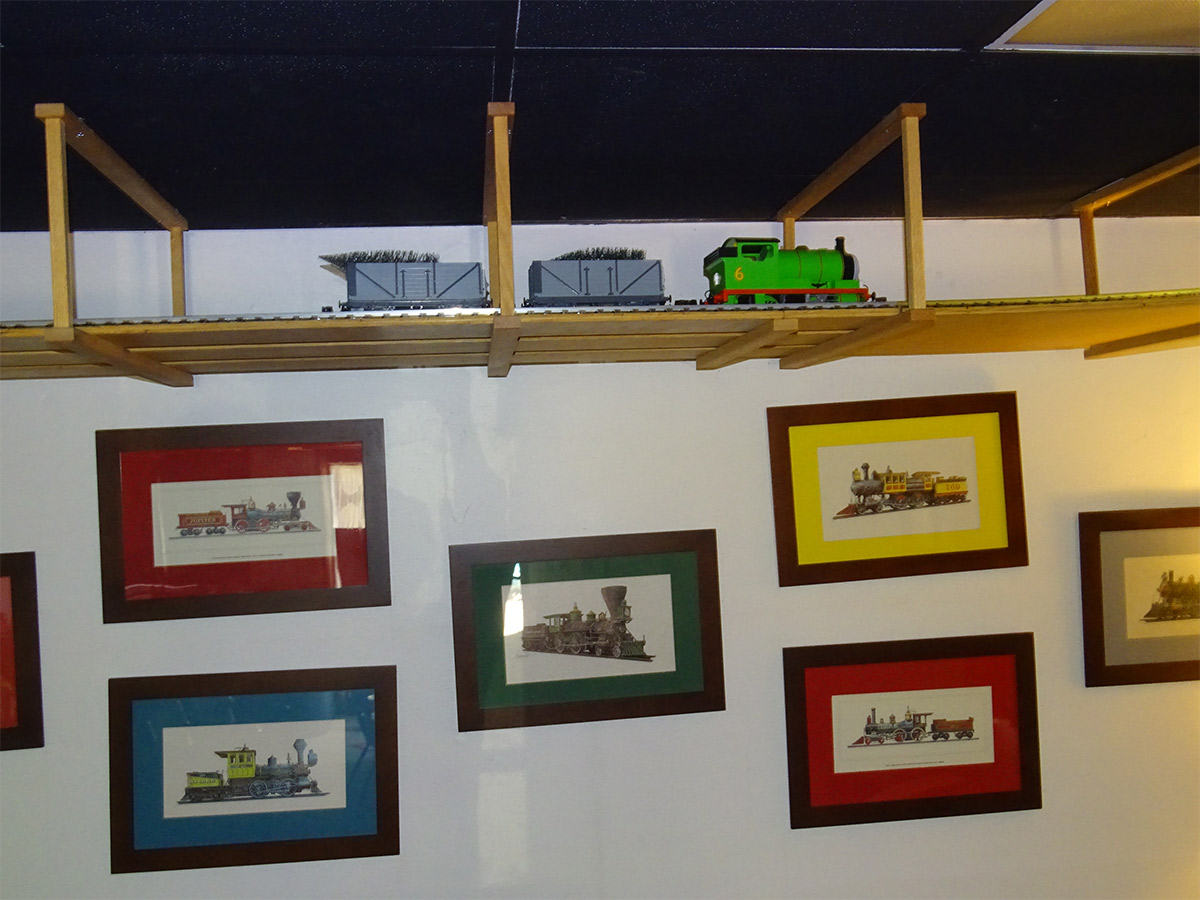 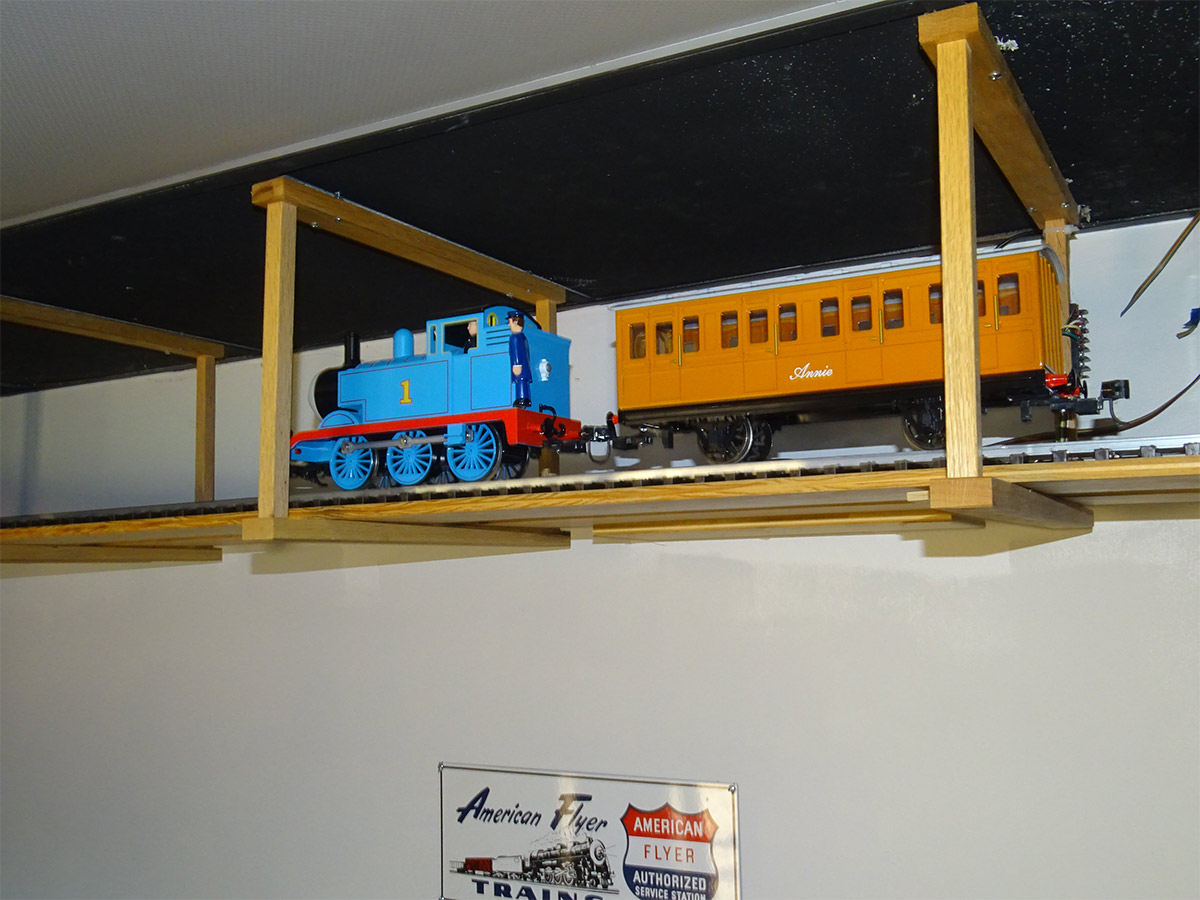 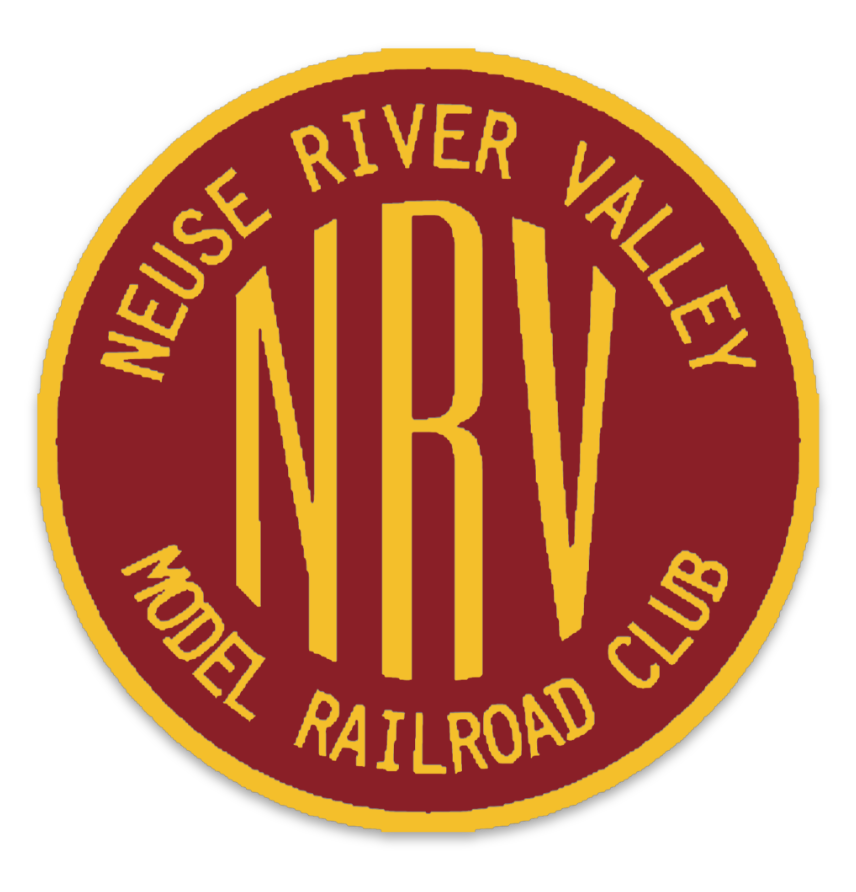